Pan had only been working in the tavern in a few days when he first laid eyes on sweet Natsuki, the Yamatai girl.  She was seated at a table talking to a Stygian woman of the darkest complexion and motives.  And being wise, Natsuki saw Pan and asked him to take a seat beside her lest the Stygian, who she took for a witch, tricked her and cast some sorcerous spell upon her in their solitude.

So Pan being Pan, and always friendly and polite, obeyed and sat beside the two.  The one woman was barely covered with anything at all, but and the other, namely Natsuki, was dressed in full armor and her face was covered.

As the ladies talked Pan listened and wondered why the one lady had her faced covered.  But as he listened the conversation to just that: the mysterious mask covering the face of the armored and petite younger woman.

A few moments later Natsuki, as Pan would soon learn her name was, removed her mask and Pan saw the most beautiful face he had ever seen in his short life.

But that is a story for another day because today’s story is the story of Pan, a former prisoner of the Bone Caravan, now rescued and coming face to face with the Demon-man Roble.

When Roble came into the Worldy Pleasures Tavern Pan did not recognize him but he saw and imagined that he was a warrior of great strength and power.  And being frightened by Roble, Pan hesitated a moment before mustering his courage and walking up to him and saying, “Welcome to the Worldly Pleasures Tavern, I’m Pan, can I get you anything?”

Roble, being Roble, did not answer the young man, but instead asked the room a question, “Was there an undead attack on the tavern today?”

Hearing this Pan mustered up his brave side again and replied, “Yes sir, and I helped Lord Faust to drive the minions from the porch!”

Just then, Muirne, who was standing nearby groaned and said, “Pan, see about that ALE I asked for!”

“Yes sir, replied Pan as he quickly turned to get Muirne his ale and Roble said, “Then I shall require a pound of your flesh!”

Terrified, Pan handed the mug of ale Murine and asked, “What does he mean Samirah?”

Samirah had been standing near the stairs the whole time, not saying a word. And so when Pan turned around for the ale he saw her and was comforted.

“Pan,” said Samirah as she took hold of his arm, “Come with me right away!”

“Yes mam,” said Pan as he obediently followed Samirah, terrified and in tears.

The two ran down to the basement and out the back door and then to the elevator up to Adutos, Lord Faust’s keep.  Once safely inside the Keep Samirah and Pan continued up the stairs and eventually up onto the roof.  From there if things worsened with Roble, they would be able to see him coming and perhaps slow him down and escape capture.

“From here I will be able to shoot Roble with an arrow to the face and keep you safe Samirah!”, explained Pan as he regained his sense of courage and nocked an arrow in his bow.

“That is the plan, but we will only be able to slow Roble down Pan, and let’s hope it doesn’t come to that,” replied Samirah, still visibly shaken and serious.

“I hope you are right…”, replied Samirah, but not as sure. 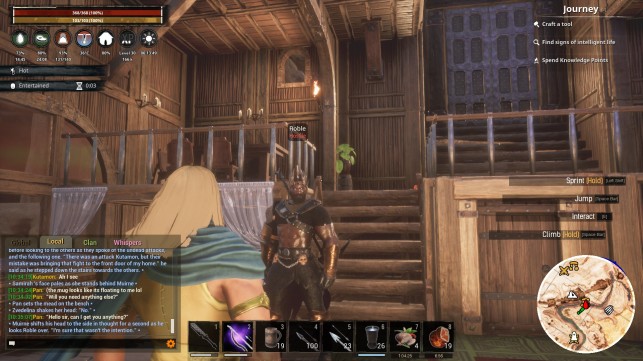